The 12 Hour Race held in 2007 was not the first time a 12 Hour Race has been run at Bathurst. The 1991 Bathurst 12 Hour almost didn’t happen, but it was to prove an amazing spectacle and one that everyone wanted to be part of the following year.

The 2007 WPS 12 Hour marked the return of production endurance racing to Mount Panorama. There were two 24 hour races, in Bathurst 2002 and ’03, but the inaugural WPS Bathurst 12 Hour recalls a glorious, if brief, era back in the early eighties ‘90s, when production car endurance racing returned to the Mountain, the first time racing in darkness was ever staged at Bathurst.

That first 12 Hour Race at Bathurst, in 1991, was a milestone, a frontier event in so many ways. The very idea of night racing at Bathurst seemed almost unthinkable, and the 12 hour duration was near twice as long as the traditional 1000km enduro - one of the toughest tests of car and driver in world motorsport. Many wondered: could the modern cars of today even cope with 12 hours of daylight and in darkness around Mount Panorama?

The Australian motor racing scene in 1991 was very different from today. There was no V8 Supercar Series, but rather the old Group A category that was in a slow decline, crippled by the economic recession and the dominance of the controversial all-wheel-drive turbo Nissan GT-R.

But production car racing at the time was going strong. The formula for the Australian Production Car Championship catered for six-cylinder Commodores and Falcons, and they were turning on some great racing, with full grids, and some manufacturer support from Ford and Holden.

Looking at the decline of touring car racing and the healthy production car racing scene, promoter Vincent Tesoriero saw an opportunity. Why not run cars like these in a 12 hour endurance race at Bathurst? It was an idea out of left field - the production car championship races were little more than 10 or 15 lap sprints, not a 12 hour grind around a place like Bathurst.

Tesoriero was a promoter of some experience, but mostly in the field of motorcycle racing. He had staged the Six Hour production motorcycle races of the late ‘70s and early ‘80s, as well Mr. Motocross. Coming from the motorcycle world, he saw this as a chance to bring racing back to Bathurst over the Easter weekend by combining them with cars - bikes racing on Friday and Saturday, followed by the 12 Hour on Sunday.

Putting on an all new event in the middle of the recession was never going to be easy. But Tesoriero had bagged a big sponsor in James Hardie, former backer of the Great Race from 1968 until 1987. The race would be called the James Hardie 12 Hour. The plan came together late in 1990, leaving only a few months to launch and organise the event, and attract an entry. Quickly the sceptics assembled to tell the world the event was just not going to happen. But the enormity of such a race, the challenge of 12 hours at Bathurst, resonated within the motor racing community. Despite an impossibly short deadline, drivers and teams from around the country rearranged their race schedules to be there.

The entry for the first 12 Hour wasn’t large, it was big enough. Twenty four cars spread across a range of classes, and including the turbo-charged cars that had been outlawed from the production car championship the previous year. It was these cars, such as the Toyota Supra Turbo, that would be the obvious choices among outright contenders. Indeed, the 1989 Australian Production Car Champion, Peter Fitzgerald, saw the opportunity immediately. He had already converted his championship winning Supra back to road car specifications for his wife to drive, and so Mrs. Fitzgerald was about to find herself without her every day driver…

Against a smattering of smaller turbo cars and Commodores in V6 and V8 form, these two Toyota’s would be the cars to beat.

Interestingly, the winner of last 12 Hour Race held in Australia, at Surfers Paradise in 1970, Colin Bond, was the first to lodge an entry, a Caltex - sponsored semi-factory Toyota MR2 with John Smith and Bruce Stewart. Other notable entries included former Group C frontrunner Warren Cullen, who put together in short time a Holden Commodore SS V8 he would share with another Group C identity, Garry Cooke, and his son Glenn.

Add in the Citroen BX for 1987 Bathurst 1000 winner Peter McLeod, five Suzuki GTis, a lone Ford Falcon and Nissan 300ZX and a sole Ford Laser TX3 4WDTurbo which was entered by Ford in its first public return as a factory team since the 1970’s and campaigned by reigning Australian Production Car Champion Kent Youlden, his brother Brett and Ken Douglas, now technical chief at Stone Brothers racing, and you had an interesting mixed bag of entries with a smattering of manufacturer support.

But the big drawcard was Peter Brock. After three seasons in the wilderness driving BMWs and Ford Sierra touring cars, for ’91 Brock was back behind the wheel of a Commodore in the championship, so it was natural that a Commodore would be his 12 Hour mount – in this case a V6 version he would share with Neil Crompton and journalist Peter McKay.

The initial plan was to run the race from 9am to 9pm, but this was disallowed by Bathurst Council. Instead, it would start at 5:15am and finish at 5:15pm, just in time for to make the nightly news bulletins. Network Ten would cover the final two hours live. The schedule change would prove a masterstroke.

But how many of the 24 cars would still be running at the end? Would the Race even go 12 hours? It was an obvious question to be asked of such a long race, by far the longest race ever held at Bathurst, with such a small field, and it was one that gave the promoter a few restless nights as the Easter weekend approached.

“My biggest concern was the possibility of getting to hour eight and having no cars running”, Tesoriero recalls today, “when we’re about to go to two hours live TV coverage…yes, I was worried about that. But even though the teams had a very limited preparation time, they did a fantastic job and all credit to them. The finishing rate was excellent.”

Qualifying was held in the day and night of Good Friday. As expected, the two Supra Turbos were outclassing their rivals for sheer speed. Fitzgerald laid the foundations for the weekend, claiming pole, a staggering four seconds faster than Bourke. A surprising third fastest was George Fury in a Mitsubishi Galant VR4 prepared by Bathurst local Rod Jones. As for the other runners, the works Laser TX3 qualified sixth, Brock right behind the Ford in seventh, Garry Rogers in a Nissan 300Z in 10th and Bond’s MR2 in 12th.

Conditions were forecast to be fine for Easter Sunday, but Easter Saturday was drenched in a day long downpour. So came the start at 5:15am on a bitterly cold Sunday morning, the track was still quite damp.

So it was that after a short span of three months’ planning, the first Bathurst 12 Hour began at exactly 5:15am. Headlights ablaze in the pre dawn darkness, the small collection of 24 teams and cars faced the unknown: how many would still be there 12 hours later?

Event with reflector tape numbers and sign writing; it was almost impossible to distinguish the different cars as they charged up the Mountain after start. But that didn’t matter: watching the snaking train of headlights piercing the pre dawn stillness across the top of the Mountain was an amazing experience for those who had braved the early morning and the cold to witness it. It really did feel like an historic moment in Australian motor racing.

The two Supras got the jump and led the first hour before their planned fuels stops. Once it all settled down, it was the Fitzgerald Supra that commanded the front running spot. Already some in trouble. Before the two hour mark, the Roland Hill Commodore V8 lost a wheel down Conrod Straight. Wayne Park beached his similar example at Murray’s Corner and eventually retired and the Mal Rose/Paul Flottman Commodore V6 blew an engine.

The front runners were also feeling the strain. The John Bourke Supra was cooking its brakes and lost a lot of time rectifying the drama. So too would the George Fury Galant VR4, but its dramas were more bizarre. It fell foul to a simple case of modern technology. Originally built to run as a rally car; it was engineered to run on leaded fuel, but under the race regulations it had to run on unleaded. So when the engine’s computer didn’t recognize the fuel mixture, it misfired and fouled its spark plugs. The solution was to disconnect the battery so the computer memory would be erased, then reconnect it so the car could now run on unleaded. The problem was solved instantly and the Galant would resume to eventually finish 10th outright.

The Mountain turned on the event, as everyone was suddenly reminded why the former 9am Great Race start time was moved to 10am in the late 70’s – to avoid early morning fog on the Mountain. As the sun rose, the mist descended, reducing visibility to barely 100 metres. The Safety Car was brought out for an hour until the fog lifted. Once it did, the day remained fine and clear until the chequered flag.

As the race unfolded, the works Ford Laser came into play, slotting into second behind Fitzgerald. The little car may not have been as quick as the race leader, but it made a lot of people take notice.

Brock, too, was storming up the leader board and at one stage was third outright in his V6 Commodore. He looked set to finish in that spot, but then came two pit stops in quick succession to rectify a brake pad drama with 100 minutes remaining. The Brock crew would have to settle for fourth behind Cullen, the first V8 Commodore home.

For Colin Bond, it was a case of David unable to beat Goliath. He had boldly predicted that the MR2 with its light weight and perfect weight distribution would rope in the Supras. It didn’t, and when the Safety Car threw out his plans for scheduled brake changes, Bond battled along to finish sixth.

But it was the Fitzgerald Supra and the efforts of Fitzgerald, Grice and Arkell (whose time in the car was limited) that won the day, a well planned attack netting the inaugural 12 Hour by two laps. It was, interestingly, also the first time a Japanese car won an endurance race at Bathurst – Nissan’s GT-R would have to wait another seven months before it could finally accomplish Bathurst glory in the 1000.

While it wasn’t much of a contest, there was a real sense of achievement at the end of it. Everyone who was there: competitors, spectators and even the skeptics in the media, felt that they had been part of something historic.

They had. The first race of its type in Australia, and a return to the tradition of long distance production car racing at Bathurst. The manufacturers could see it too. Very soon they were clambering to be part of the ’92 event. Despite what the skeptics said, the 12 Hour was a reality – and it turned out to be an amazing event. And over the next three years it would just get better and better. 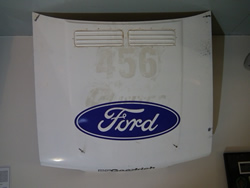